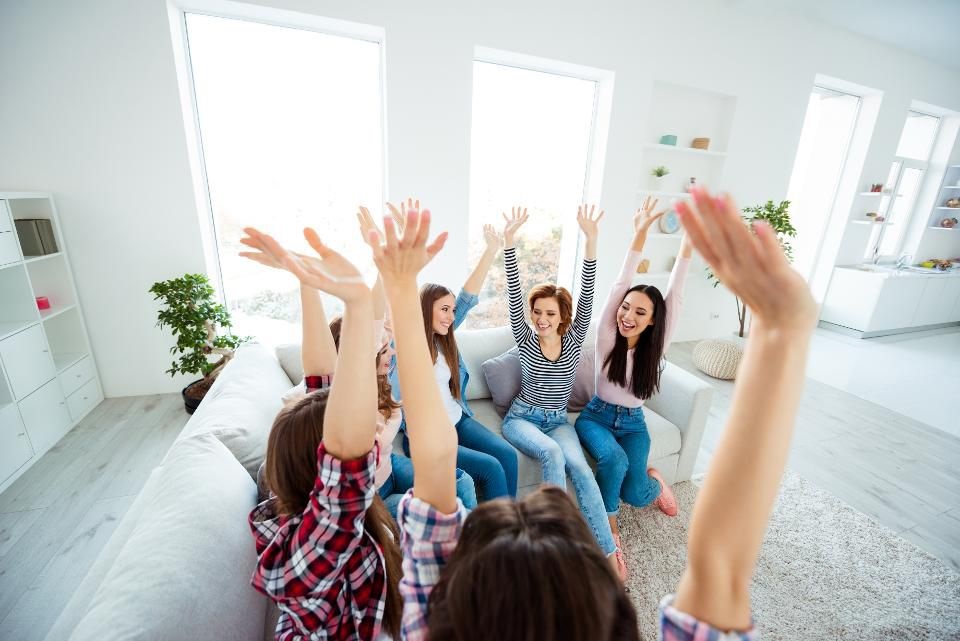 I always say a woman alone has power; collectively we have impact. Traditionally we have been taught to be competitive with one another, because there was such a scarcity of jobs at the top. It’s so clear that strategy doesn’t work. The truth is that raising each other up and channeling the power of collaboration is truly how we’ll change the equation—and have a lot more fun along the way.

There is a boys’ club where women never felt comfortable, so we decided to create a Girls’ Lounge more than six years ago where everyone feels like they belong. We discovered two things:

Today we’ve connected more than 17,500 corporate women and female entrepreneurs, and evolved the name to The FQ Lounge, where women are still the majority, but men feel welcome and comfortable.

We need to reverse the stereotype that women don’t support other women. There is research that shows women in particular benefit from collaboration over competition.  Study after study shows women who support women are more successful in business.

New research in the Harvard Business Review finds that while both men and women benefit from having a network of well-connected peers across different groups, women who also have an inner circle of close female contacts are more likely to land executive positions with greater authority and higher pay, while there was no link found for the success of men in terms of the gender composition of their inner circles.

The reason? Women trying to rise up into leadership face cultural and systemic hurdles that make it harder for them to advance, such as unconscious bias. The study suggests that a way to overcome some of these hurdles is to form close connections with other women, who can share experiences from women who have been there, done that—from how to ask for what you’re worth to bringing your unique talents to leadership.

“There’s a new girls’ club that we didn’t have before, because the workplace was largely male dominated,” says Jocelyn Greenky, an office culture and politics expert and CEO of Sider Road. “Now that so many more women are entering the workplace, we’re finding our voice. We’re also building circles of trust with one another because we may be experiencing similar hurdles, and have each other’s backs.”

Laura McGee, CEO of Diversio, which uses artificial intelligence to help companies overcome diversity challenges, agrees.  “Across all our companies in multiple sectors and countries, we see access to networks as one of the key barriers preventing women from advancing. We know that women are under-sponsored by senior men, and may need to compensate by developing strong professional relationships with other women. My hypothesis on the research findings is that these women are effectively acting as mentors and sponsors for one another.”

Here is advice from women leaders on how to find and cultivate a close network of female professionals.

Take the word “work” out of networking. There is power in relationships that extends beyond a generic introduction. When you create connections based on shared interests and goals, you’ll be more successful at your job, because people want to work with people they know and like. The Girls’ Lounge first started because I didn’t want to go to a male-dominated conference alone, and so I invited some girlfriends to come along and asked them to invite their friends.

“The Girls’ Lounge has impacted me both personally and professionally.  Most industries are so siloed, but the lounge breaks down these barriers and lets you connect with women you would never even imagine,” says Gail Tifford, Chief Brand Officer of WW, formerly Weight Watchers. “And that’s when magic can happen.”

“My advice to women is to reframe what “networking” is,” says Tifford.  “The fact alone that the word has “work” in it creates pressure for women to feel like it’s something they have to do, and then I see women stress about how to do it.  Simply putting yourself in environments that give you the opportunity to meet with peers and get to know each other and share experiences can be a game changer. And chances are, if you make meaningful connections, they are ones that will last a lifetime.”

Prioritize relationship building. You don’t do business with a company, you do business with people you like and trust. I have always prioritized time with my girlfriends. “To make these connections, you first have to decide if it is important to you,” says Erica Keswin, author of Bring Your Human to Work and founder of the Spaghetti Project.  “Does your calendar reflect your values? A lot of time it doesn’t, not because we’re bad people, but because we have so much on our plates. Ask yourself, ‘Are relationships important and why?’ It could be because you want a new job, or to move up in your career. We’re not connecting when left to our own devices, so schedule time for it.”

Know that connection building isn’t one and done. Networking is one and done: It’s where you shake someone’s hand and give them a business card. Where does that leave you? With a stack of business cards on your desk. A relationship, on the other hand, touches your heart and creates an everlasting partnership. To keep connections alive, they must be nurtured.

“Seek out people who you admire. Ask for advice, and follow up. Participate wherever and however you can. In short, be a doer!” says Linda Yaccarino Chairman, Advertising and Partnerships at NBCUniversal.

Amplify other women. I love the Shine Theory, which is the idea that when you help another woman rise, we all shine. “Build other women up! If you see your co-worker doing a great job, give them credit…tell your boss or other co-workers,” says Rebecca Wiser, cofounder and director of communications at Womaze, an app centered around self-empowerment for women. “At first it may seem like you’re taking attention away from yourself, but you’re actually showing that you’re a supportive team player as well as an inspiring leader—and secure enough in yourself to praise others.”

Find your squad—and tap into them. Who would be your go-to group of girls if you had an emergency, needed honest advice, or wanted a key business introduction? When it comes to building relationships, you often get what you give.

Pam Kaufman, President of Viacom/Nickelodeon Global Consumer Products, shares this advice that she once received: “Richelle Parham, the former CMO for eBay who sits on the board for Best Buy, once asked me, ‘Who is on your team?’ She didn’t mean people I managed, but who I had in my professional life that served as my support network. Taking Richelle’s advice, I began building my squad - people I could bounce ideas off of, go to for advice, pick me up when I needed a boost. Today, my squad is so important for my career and my mental well-being. Not only do we support each other, but we act as connectors to people and opportunities. Whenever one of us comes across a great opportunity, we immediately send it to each other. It is amazing to be part of a group of women who want you to be your very best and actively help you to succeed.”